“To Our Great Joy”

Membra Jesu Nostri is a gorgeous work of seven cantatas, each representing a part of Christ’s crucified body. Six of the cantatas are performed with violins and continuo but the cantata representing Christ’s heart is performed with a viol consort. The change in tone colour when the viols start playing is breathtaking, and often inspires an ‘ahh’ from our audience.

The consort chose some of their favourite pieces for their ‘Heart’s Ease’ programme, some of the most beautiful music ever written including works by Jenkins, Byrd and Farina. 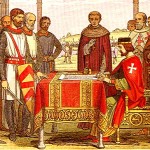 As part of the Toronto Early Music Centre’s Fair at Fort York and in celebration of the Magna Carta on display, The Cardinal Consort of Viols presented music from the time of Magna Carta’s true revival and glory in 17th-century England. Early in the century when King James claimed absolute authority, Sir Edward Coke revived the defunct Magna Carta to declare that the King was subject to the rule of law – thus the skirmishing began, leading to the civil war. Through the century, the kingdom’s struggle for rights, freedoms, and the rule of law for all brought about the Magna Carta’s practical implementation as well as the English Bill of Rights at the close of the century.  Many musicians such as William Lawes took sides, fought, and paid the price, but this was still a time rich in inventive and original music. The 17th-century biographer Roger North famously said: ‘Many chose rather to fiddle at home, than to goe out, and be knockt on the head abroad’. The consort presented Jenkins’ masterful musical depiction of war, Newarke Seidge, Tomkins’ ‘Sad paven for these distracted tymes’ along with works by Lupo and of course, Lawes.

The Cardinal Consort performed ‘Love and Regretz’, a programme exploring the complexity of love, featuring works by Josquin, Holborne, Dowland, and Jenkins.  The compelling tenor Bud Roach joined the ensemble in some consort songs that were guaranteed to stir the passions. 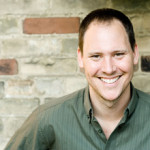 An English Sampler: music for viols and voices

The Cardinal Consort joined forces (once again!) with the wonderful Mark Vuorinen, conductor, and one of his new choirs, the Conrad Grebel Chamber Choir from Waterloo. We were also pleased that Mary Anne Ballard was able to join us again! Our programme, An English Sampler, featured some of England’s finest and most beloved music for viols and voices.

Tallis Choir: ‘The Merry Harp and the Viol’

May 10, 2014
St.Patrick’s Church, Toronto
We very much enjoyed our collaboration with the Tallis Choir of Toronto in a concert of verse anthems and consort songs from the Tudor and Jacobean courts.  We were thrilled to have Mary Anne Ballard on bass viol,  and Marilyn Fung on G violone,  joining us again!

October 12,  2013
Royal St. George’s College Chapel,  Toronto
The  Cardinal Consort of Viols performed music  ‘Known and Loved’  for its annual Thanksgiving Eve concert on Saturday,  October 12th.  Included were some gems of the repertoire by John Jenkins,  Giovanni Coprario (aka John Cooper),  John Ward and Orlando Gibbons,  as well as others not yet known but sure-to-be-loved,  including music of Leonora Duarte and Andreas Hammerschmidt.

The Consort was thrilled to be joined for this concert by Mary Anne Ballard,  treble viol,  known and loved for her work with the Baltimore Consort and the Oberlin Consort of Viols. 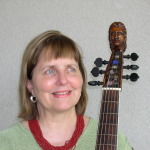 Mary Anne Ballard, viola da gamba, has, as a performer and programmer, explored a wide variety of early music from the Middle Ages through the Baroque periods. She has toured 47 states,  The Netherlands,  Germany,  and Austria,  and appeared on numerous radio programs (e.g. St. Paul Sunday,  Performance Today) with The Baltimore Consort,  an ensemble whose recordings of repertory from Renaissance England,  Scotland,  France,  and Spain,  as well as early traditional music have ranked in the top 10 on the Billboard “classical crossover” charts.  She is also a member of the Oberlin Consort of Viols,  Brio (Sephardic music),  Galileo’s Daughters,  and Mr. Jefferson’s Music.  As a guest viol player,  she has appeared with the Smithsonian Chamber Players,  the Bethlehem Bach Festival,  the Philadelphia Singers,  and the Indianapolis Baroque Orchestra.  Ms. Ballard has taught viola da gamba and directed early music ensembles at the University of Pennsylvania,  Princeton University,  and the Peabody Conservatory,  and she is currently on the faculty of the summer Oberlin Baroque Performance Institute.  In New York,  she is Music Director for the GEMS production of the 12th-century Play of Daniel,  with performances at The Cloisters and Trinity Wall Street Church.

June 16,  2013
St. David’s Anglican Church,  Toronto
Matthew Locke is considered to be among the finest of the 17th century English composers before Purcell. Most famous for his ventures into early English opera,  he also composed spectacular instrumental works full of complex harmony and ravishing beauty. We were very pleased to be able to present some of his superb music for viol consort,  deemed by contemporary sources as the last and finest of its kind.

Henry Purcell on the passing of Locke: “What hope for us remains now he is gone?”
Roger North (1651-1734) on Locke’s Consorts of Fower Parts:
‘…a magnifick consort of 4 parts,  after the old style,  which was the last of the kind that hath bin made,  so wee may rank him with Cleomenes King of Sparta who was styled ultimus herooum.’
‘…worthy to bring up the rere,  after which wee are to expect no more of that style,  especially considering how few before may be compared with it.

A concert for the Associates of the Toronto Symphony

April 7,  2013
A programme of some of the most exquisite music for viol consort by John Jenkins, William Byrd, Anthony Holborne and Carlo Farina.

October 6,  2012
Royal St. George’s College Chapel, Toronto
The superb Montreal soprano Dawn Bailey joined us for an evening of consort songs and instrumental music written for and about some very special ladies.

September 17,  2012
Church of the Holy Trinity, Toronto
Cardinal Consort presented “Rest awhile your cruel cares” as part of Holy Trinity’s  ‘Music Mondays’  lunchtime series. Our midday respite from the hustle and bustle of city life included exquisite music for viols by Dowland,  Holborne and Robert Johnson.  We were thrilled to be joined for this concert by our good friend and colleague,  Marilyn Fung,  who played both tenor viol and G-violone.

September 19, 2011
Church of the Holy Trinity, Toronto
Ayres and dances by John Jenkins will be framed by two of the most heart-wrenchingly beautiful pavanas by Carlo Farina